Timepieceking is reader-supported and might earn a commission (at no additional cost for you) for purchases made via links in this article.

Since the introduction of the first Cartier Tank model in 1917, the unique shape of the watch is still a much-desired quality amongst watch aficionados – whether talking about the male or female community.

Louis Cartier, the founder of the French brand and the person behind the iconic model, sought to move away from the standard “feminine jewelry” approach by creating a watch that would appeal to males (the first “Tanks” were ladies-only models).

So, what would grab a man’s attention quicker than a tank-shaped watch on a tiny wrist of a female? Nothing, thought Cartier. And, considering the fact that at that time the tank was the most advanced war machine around and many hoped it might break the World War stalemate, he might have had a point. Even to this day, the birds-eye-view of this watch is a Renault 17 tank.

Now that you’ve heard the story behind it, we’re pretty sure you won’t be able to stop seeing the similarity.

However, liking the Cartier Tank watch and being able to afford it are two things. With that in mind, we’ve created a list of top 9 watches that look like Cartier Tank but won’t cost an arm and a leg. All of these come from respected brands and all, in one way or another, pay homage to the iconic design of the 1910s. 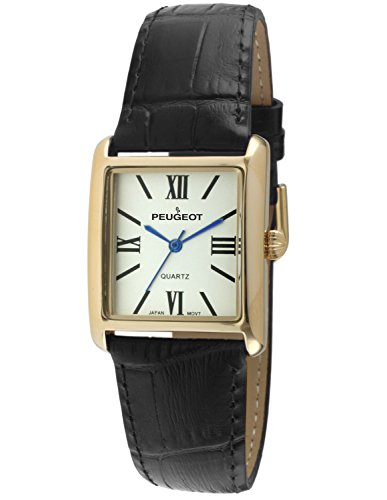 Opening up the list of affordable Cartier Tank alternatives is this model from Peugeot. The low-budget watchmaker is particularly known for a rich collection of timepieces paying homage to the Tank design.

For a watch priced this low, it’s certainly impressive that the 26mm stainless steel case comes with 14k gold plating. The timepiece is equipped with a genuine leather strap with a tang buckle closure that’s also gold-plated.

Characteristically for a Tank-style watch, the snow-white dial features large Roman numerals. This model uses a three-hand complication. All hands are blue which is another common theme in original Tank timepieces. At noon o’clock is the Peugeot logo.

Protecting the watch face from damage is an ultra-reliable mineral crystal glass. The timepiece also offers a 30m water resistance.

Like the vast majority of Peugeot watches, 3036BK is powered by a Japanese quartz movement produced by Seiko. It offers an excellent accuracy of +/- 15 seconds/month. 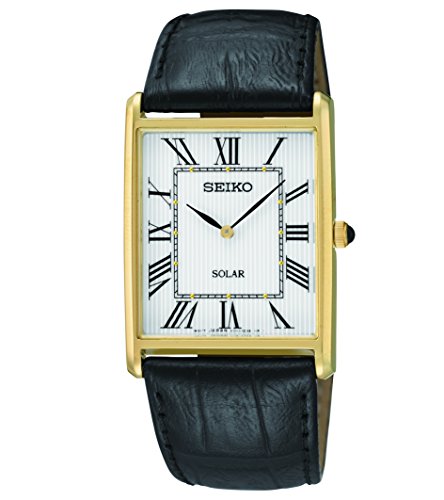 Although Seiko is a well-respected manufacturer of movements amongst brands like Peugeot, the Japanese mogul is predominantly known for its excellent line of timepieces.

Although Seiko might not offer the same number of Cartier Tank homages as Peugeot, their small Tank-inspired line is up there with the most impressive. Certainly, Seiko SUP880 is one of the best value models.

What distinguishes the model from other watches that look like Cartier Tank is the fact that it’s solar-powered. Considering the super-affordable pricing, it’s a feature that certainly deserves a mention. Powered by any form of light, the model has a power reserve of 10 months. That essentially means you will never have to worry about running out of fuel, nor replacing a battery.

The model wears slightly bigger than the one discussed above, with the gold-tone case measuring 28,5 in diameter. The case is made from stainless steel. The watch arrives with a genuine leather band with a tang buckle clasp.

The dial looks a lot like the original Tank Solo watch. It just has two arrow-shaped hands that are used to count the hours and minutes. The second hand has been left out of the equation. The Seiko logo (at 12 o’clock) and the “Solar” movement designation are both located inside a rectangle in the center of the snow-white dial. The watch hands do not exit the rectangle while pointing to the big Roman numerals, which contributes to the elegance.

On the durability front, the model offers solid protection against screen damage in the form of a Hardlex glass. On the ruggedness scale, it’s very similar to mineral glass offered by a lion’s share of watches on the list. The watch is also water-resistant up to 30m.

Naturally, the solar movement is quartz. Seiko uses its own in-house calibers in all the watches. Accuracy-wise, it shouldn’t lose or gain more than 15 seconds monthly. 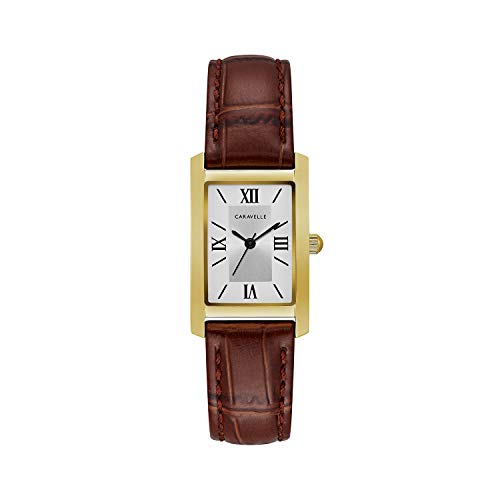 Caravelle is another budget watchmaker fond of the iconic Cartier Tank design. The American brand has many beautiful rectangular timepieces to its name, with the model you see above a solid representative of the collection.

Caravelle 44L234 is a watch designed for ladies. The feminine approach is particularly visible in the ultra-tiny gold-tone case, with a diameter of just 21mm. The presence of a brown leather strap with a buckle closure certainly adds to the stylishness of this model.

The silver-white dial features three black hands, pointing to Roman numerals. The Caravelle logo is inside the silver rectangle, positioned at noon o’clock.

The dial window is made from mineral crystal glass. When it comes to water resistance, it’s 3ATM (30m).

Caravelle 44L234 runs on a Japanese quartz movement with an industry-standard accuracy of +/- 15 seconds/month. 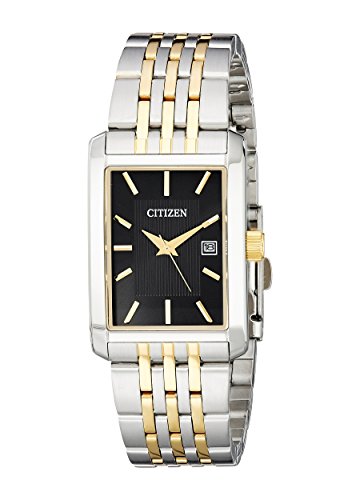 Next to Seiko, Citizen is considered the second big gun of the Japanese watchmaking industry. Akin to Seiko, the Tokyo-based watchmaker isn’t known for a huge collection of Tank-style watches but the very few available certainly turn heads.

What’s worth noting, the watch is one of the cheapest Citizen models available at present. Also, BH1678-56E is the only fully stainless steel model on today’s list of Cartier Tank alternatives. The rectangular case measures 26mm in diameter whilst the gold-and-silver-tone 7-link bracelet uses a fold-over-clasp closure.

The black dial features three gold-tone hands and stick indices. It certainly is a bit of a departure from the Tank style that focuses on Roman numerals. Additionally, at three o’clock there’s a date display window. The Citizen label sits at noon o’clock.

The scratch-resistant mineral glass makes sure the watch face is well protected. The timepiece is also water-resistant up to 30m.

The watch is powered by a Japanese quartz movement. It matches the accuracy of all the predecessors (+/- 15 seconds/month). 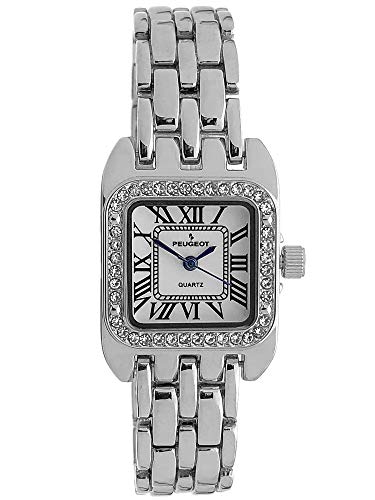 Peugeot 7102S is the second ladies model on today’s list. Because of the more square face, it resembles the Tank Francaise collection.

Characteristically for Peugeot, the brand offers really unique materials despite the bargain-basement pricing. The 24mm case is 14k gold-plated and adorned with European crystals. The watch comes with a 5-link stainless steel bracelet with a fold-over deployment clasp.

The white dial features a centrally-located square very reminiscent of the Cartier Francaise W51008Q3 model. Another similarity is the three blue hands pointing to massive Roman numerals. The Peugeot label is placed at noon o’clock. Furthermore, the dial has a ceramic finish.

Similar to the previous Peugeot model, this one features a mineral crystal dial window. It also has the same water-resistance capabilities (3ATM/30m).

Next to Caravelle, Bulova is another American watchmaker with plenty to offer when it comes to Cartier Tank homages. In fact, Caravelle is owned by Bulova and is their entry-level brand focusing mostly on fashion watches. Bulova itself is a bit more diversified.

The 96B107 model comes with a rectangular stainless steel case measuring 29mm in diameter, and a black leather strap.

The snow-white dial features three silver-tone hands. These point to stick indices and Roman numerals positioned at 3, 6, 9, and 12 o’clock. At noon o’clock there’s also the Bulova logo whilst at 6 a very tiny date window.

The stylish face is protected by mineral crystal glass. When it comes to water resistance, the timepiece can withstand water pressure of up to 30m.

Similar to other Bulova timepieces in the low-budget price range, it’s powered by a Japanese quartz movement. 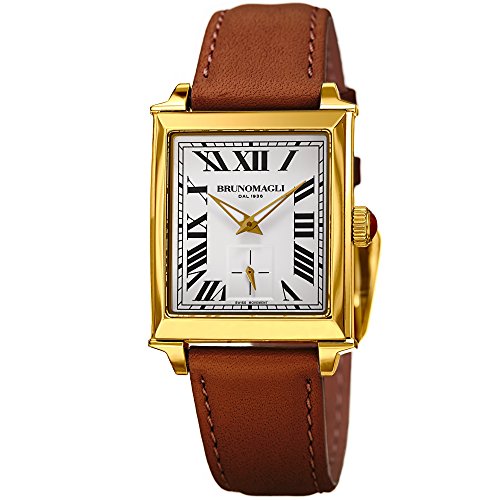 Bruno Magli might not be as well-known as any of the names we’ve already covered above. However, the Italian fashion brand has some impressive timepieces to its name – just like the Tank-inspired model above.

Quite frankly, in terms of material quality and durability, the model holds an advantage over the previously-discussed timepieces. We will learn why in a second.

The dial has a white background and visibly draws inspiration from some Cartier Tank models. It features three gold-tone hands. The hour and minute pointers are centrally-located and luminescent while the second hand operates on the square sub-dial positioned at 6 o’clock. The black Roman numerals are massive in size and certainly boost the vintage look.

What’s really impressive about this Bruno Magli watch is the inclusion of a sapphire crystal glass. When it comes to watches under $200, this is a true rarity. Sapphire crystal watches are known for extreme scratch-resistant properties. Furthermore, the crystal comes with an anti-reflective coating which greatly boosts visibility. The watch also offers superior protection in terms of waterproofing, since it is water-resistant to a depth of 50 meters. 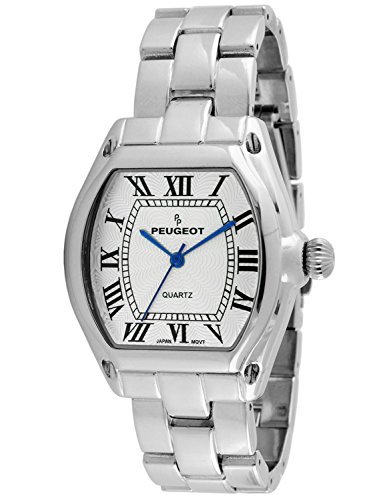 The third (and the last) Cartier Tank homage from Peugeot.

What clearly distinguishes this model from the rest included on the list is the so-called Tonneau shape of the case. It’s fairly massive for this type of watch, measuring 34mm in diameter. Both the case and the three-link bracelet are made from stainless steel. Both are nicely polished.

Once you look closely at the white dial, you will notice small wave patterns. Centrally-located is a Tonneau shape matching that of the case. Inside you will find three blue hands, the Peugeot logo at noon o’clock and the quartz label at 6 o’clock. Outside of it are large Roman numerals.

Unsurprisingly, the dial window is made from mineral crystal glass. The model comes with a modest 30m water resistance. It’s powered by a Japanese quartz caliber with an accuracy of +/- 15 seconds/month. 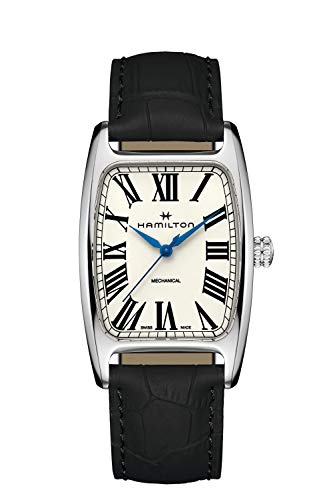 Last but not least, closing the list of the top 9 watches that look like Cartier Tank is the most premium model from Hamilton.

The H13519711 timepiece is one that greatly resembles the Tank approach. Even though Hamilton is an American brand at heart, all the watches produced nowadays come with the Swiss-made label and are assembled in the heart of the world’s watchmaking – Biel, Switzerland.

With the 34,5mm case size, the watch is considered an equally suitable purchase for men and women. The case is made from stainless steel while the black band is cow leather.

The Tank-inspired face features a white background and large, black Roman numerals. The central part yet again includes a Tonneau shape inside which there’s the Hamilton logo and three blue hands.

Crucially, the timepiece is equipped with anti-reflective sapphire crystal glass. When it comes to water resistance, it offers protection up to 50m.

Hamilton H13519711 is the only watch on today’s list that uses a mechanical (hand-wound) movement. The caliber is naturally Swiss-made, adding to the premium feel of this model.