S Coifman made a brief reappearance in the early 2000s, with a limited-edition run of timepieces from Chiasso, Switzerland. Invicta bought the rights to the property in 2003 and has been making classically inspired watches under the S Coifman label ever since.

The company has not received nearly as much attention as IWG’s other brands. Still, it has recently resurfaced with a whole display dedicated to S Coifman at each of Invicta’s new retail locations. S. Coifman or Simon Cofman watches have been around for over a century now.

When the company started in the early twentieth century, owning a rare S. Coifman happened to be a sign of respect one would have for attention to detail.

While most of the S Coifman watches are quartz, there are a few versions with Swiss automatic movements. In comparison to its sportier Invicta counterparts, S. Coifman favors a more luxurious look for his watches.

To that aim, the S Coifmans are beautifully presented in a caramel brown leather-patterned squared-box and an oversized padded inside clamshell with a café latte-like coloring.

In this S. Coifman Watches Review, we will not only take a good look at the history of the company, but we will also dig in deep into how and when the company became the center of attention to the watch aficionado.

Disclaimer: As an affiliate, Timepieceking might earn a commission (at no additional cost for you) for purchases made via links in the article.

Possessing a beautiful watch in Chiasso, Switzerland, in the early 1900s was merely a show of affluence. Having a rare S. Coifman, on the other hand, was a tribute to one’s regard for meticulousness. There are luxury brands that are as well-known as ours in the realm of watches.

Many companies have secured their spots in popular culture because of too long-standing histories of excellence and effective marketing. Simon Coifman’s complexities and timepieces have been a passionate homage to design and engineering since 1906.

Simon Coifman completed his first watch movement in a tiny music box business in Chiasso, Switzerland, in 1906. For its 17-jewel movement, the creation was adorned with gold plating and rubies. He started making watches for local skilled machinists, coppersmiths, stonemasons, and other craftspeople in 1907.

His clocks quickly earned a reputation for exceptional functionality and design detail. This wasn’t long before S. Coifman’s clocks were dubbed “craftsman watches” due to their dedication and mutual appreciation.

In 1911, Coifman was inspired by the legendary horologist Abraham-Louis Breguet and set out to create his tourbillon movements to pay tribute to the true master. He brought his complexities and elegance to the mix in the meantime.

The news of this remarkable achievement traveled rapidly, and shortly after his first production; he was contracted to make another. Since then, only four more have been authorized, and they are believed to be worth $200,000 each on today’s market.

For a selected few collectors, S. Coifman was entrusted to build an 18K Gold Red-12 Mechanical in 1953. A limited-edition Valjoux hand-winding chronograph movement with two displays was placed in the numbered pieces. Each component was manually etched, and the steel edges were all beveled by hand as well.

S. Coifman joined the Invicta Watch Group in 2003, bringing with it the distinctive assets of its newfound siblings, Invicta and Pötger-Pietri. Ever since, the company has launched a variety of limited-edition watches, including the Red-12 Mechanism and Great Exhibition, and collaborated on the Invicta Mestizo. S. Coifman is a staunch believer in the phrase “quality over quantity.”

The firm has stayed true to its originality and character, and it is still based in Chiasso, over a century after Simon Coifman built his first clock there. The S. Coifman brand has maintained its reputation for quality and elegance to this day.

All of the pieces are handcrafted by an S. Coifman watchmaker. The sheer awesomeness of an S. Coifman wristwatch intrinsically differentiates amateur collectors from the devoted connoisseur, as it continues to preserve the authentic elegance in watchmaking craftsmanship and design. The legend lives on. 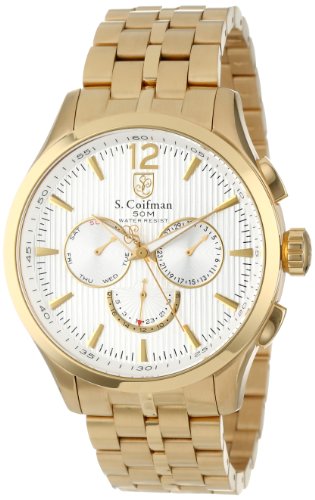 Are S Coifman Watches Any Good?

We could go on and on about the many benefits of S Coifman watches, but we believe the characteristics listed here should be enough to persuade you:

The S. Coifman automatic dress watches depict an incredible design that will capture the interest of anyone. These watches’ overall style and elegance are that of a classy traditional dress watch that goes way back into the beginning of the twentieth century.

But that’s not to say the wristwatch makers never evolved themselves to match the modern-day demands. You will see a magnificent blend of eye-catching style with designs that are sure to make you drool-worthy.

S. Coifman watches are not only fashionable but are also recognized for their long-term durability. Over the years, the company has made cautious not to compromise the watch’s durability. When you contemplate the Coifman watches’ quality and excellent craftsmanship, you can immediately picture high-grade materials that will last for a long time.

From the exterior, watches of average quality are prone to scratches and fractures. This is due to the fact that they are not constructed from high-quality components that can endure pressure and sharp edges.

Coifman watches, on the other hand, selects the materials for their watches with care, guaranteeing that only the highest quality materials are used. To this day, they are still created in Switzerland, and all of their genuine leather watch bands are produced there.

The Sellita SW200 26-jewel Swiss automatic movement powers these timepieces. The SW200 has a 38-hour chronograph movement and runs at 28,800 vph. The fundamental design of the SW200 is based on the well-known ETA 2824-2 with a few changes and one more jewel on the barrel since Sellita had a longtime connection as a collaborator for fellow Swiss movement maker ETA.

Despite this, due to technological specialization over the generations, Sellita continues to rely on Swatch/ETA for some movement aspects. The SW200 performs admirably in all of these categories. “S Coifman” is stenciled out of the Geneva striped rotor when seen through the crystal display case rear.

The rest of the movement is left unadorned. A signature pulls push crown on the 3 o’clock side of the case to alter the time. 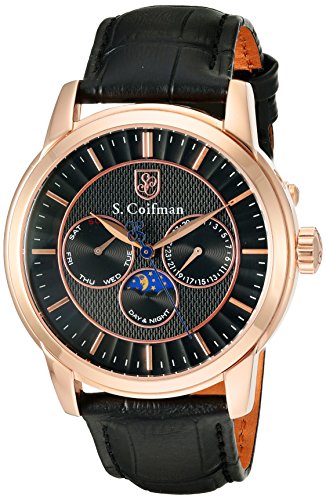 The S. Coifman wristwatch brand ensures quality in return for the money. In fact, we wouldn’t hesitate to say pricing is one of the significant factors that has attracted customers over the years.

You can find your dream watch with proper research on the S. Coifman website or Amazon. The S. Coifman Men’s SCO215 Swiss design is worth $300, and it’s undoubtedly one of the most popular of their wristwatches.

The pricing, in general, has been set at a standard to accommodate watch lovers of all classes. If you’re a businessman working for a reputable organization, you can find a classy S. Coifman SC0247 Swiss for a mere $625. That is a glimpse of what the brand is about. They are bound to serve you quality in return for your precious bucks.

Where Are S Coifman Watches Made?

S. Coifman is a Swiss brand that manufactures all of its watches in Chiasso, Switzerland. That’s where all the struggle began; in a small music box shop in 1906. Since then, the company has been on a mission to serve its customers with top-quality Swiss watches designed to accompany them with their everyday wear.

They’ve followed the same concept since the outset: only create products that they would wear themselves. Through a combination of classic and modern designs, they want to transform the watch into a current style statement.

The S. Coifman automatic dress watches depict an incredible design that will capture the interest of anyone. These watches’ overall style and elegance are that of a classy traditional dress watch that goes way back to the beginning of the twentieth century.

But that’s not to say the wristwatch makers never evolved themselves to match the modern-day demands. You will see a magnificent blend of eye-catching style with designs that are sure to make you drool-worthy.

Watches by S. Coifman are distinguished by their elevated components and calibers, which are typically absent in watches in this price range. To supply consumers with high-quality watches at not-so-high costs, the business has taken a daring strategy. In fact, Coifman beats a host of other watch companies that make similar arguments but fall short.

Several watchmakers have added visible mechanisms to their wristwatches, paired them with dazzling finishes, and marketed them as “affordable luxury” while pricing at $500 or more. S. Coifman maintains a stringent quality policy; the company adheres to its principles and is dedicated to accomplishing the work at hand.

S. Coifman, in our opinion, has not yet received the attention it deserves, even though it is a business that not only fulfills but regularly exceeds expectations when it comes to creating high-quality timepieces.

Whether or not you want to buy an S. Coifman watch is totally up to you. Still, with such prices and historical nuance to their watchmaking history, anyone will be more than interested in taking a look at their official website.

3 thoughts on “S Coifman Watches Review (Is the Brand Any Good?)”

We use cookies to ensure that we give you the best experience on our website. If you continue to use this site we will assume that you are happy with it.UnderstandPrivacy policy